The training course for trainers of “Projecting YOUth” ended successfully.

From the 29/02/2016 to the 06/03/2016 representatives and youth educators of the three partner organisations of “Projecting YOUth” met in the Spanish city of Logroño in order to share the materials and work done on the previous stages of the project, and train themselves for the future workshops for young people that will take place in all the partner countries involved on the project within the next months. 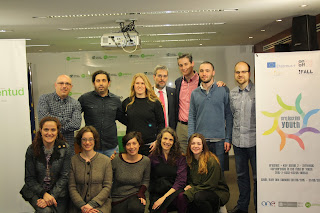 Seven representatives from the three partner organisations of “Projecting YOUth” (ON&OFF as coordinator (Spain), Calypso - il teatro per il sociale (Italy) and IFALL - Integration För Alla (Sweden) as partners) met together in the North of Spain to test and improve the pedagogic products created for the project. During the previous weeks to the event, each partner developed different learning materials to educate young people on personal and professional skills that could allow them to carry out their own theater projects or cultural events, promoting at the same time their employability. To make this possible, each participant attending the training implemented his/her theoretical work and exercises developed on the last months but using always as a base the principles of Howard Gardner about multiple intelligences. According to this, participants on the event run different workshops and activities focused on developing those horizontal skills needed to be successful in any personal and professional field and divided on ten units about different topics that were tested during the five days of activities: How to develop an artistic and youth project; the interpersonal intelligence; the intrapersonal intelligence; the musical intelligence; the kinesthetic intelligence; the logical-mathematical intelligence; the naturalistic intelligence; the linguistic intelligence; the visual-spatial intelligence; and a unit about funding and implementation of artistic and youth projects. 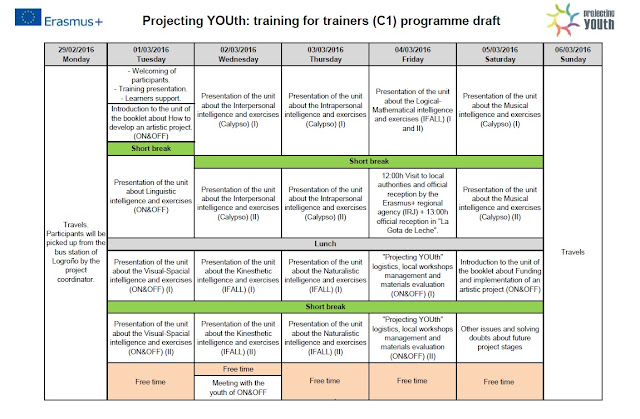 Once all the intellectual outputs designed for the training were tested, those trainers responsible of their creation worked on their evaluation, improvement and adapted them to be used for the next phase of the project: ten local workshops that the project will run simultaneously on each partner country and that will give the possibility to 45 young people to learn about the creation of new artistic projects, meanwhile they develop their personal and professional skills for a future integration on the labor market. Out of the general programme of work of the training, the event gave also to its participants the opportunity of getting to know the best practices of ON&OFF at local level for the education and inclusion of youth, and meeting other local stakeholders on this field such as the Instituto Riojano de La Juvenud (the Riojan Institute for Youth) or the youth centre for municipal services La Gota de Leche of Logroño (city where the training course took place). All the photos of the training are available on its Facebook group.

With the support and cooperation of